Everyone 6 months and older, get a flu vaccine! Influenza (the Flu) is a contagious respiratory illness caused by influenza virus. Flu virus is spread mainly from person to person through coughing or sneezing of people with the flu. It can cause mild to severe illness, and at times can lead to death.

Typical influenza illness includes fever (usually 100 to 103 degrees Fahrenheit in adults and often even higher in children) and respiratory symptoms, such as cough, sore throat, runny or stuffy nose, as well as headache, muscle aches and extreme fatigue. Although nausea, vomiting and diarrhea can sometimes accompany influenza infection, especially in children, these symptoms are rarely the primary symptoms.

The term "stomach flu" is a misnomer that is sometimes used to describe gastrointestinal illnesses caused by organisms other than influenza viruses. Most people who get the flu recover completely in 1 to 2 weeks, but some people develop serious and potentially life threatening medical complications, such as pneumonia.

Get a flu vaccine for everyone 6 months and older and Practice the 3C's to prevent the spread of flu:

NOTE:  Influenza Weekly Surveillance reports and infographs are usually tracked and posted each year during the months that flu is most prevalent - from October - April. 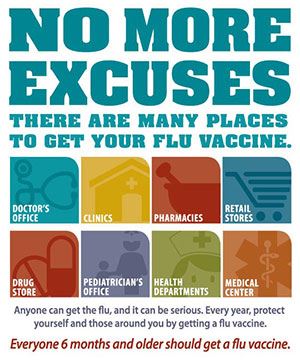